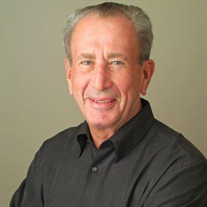 Stephen Hugh Koslow (Age 80) A sharp dresser, with a sparkle in his eye and a poker face, Steve loved to make others laugh with his witty, often sarcastic humor. He would find the absolute perfect GIFs to send his grandkids on a regular basis, to communicate a sentiment with a single hilarious photo or video. Steve loved his adventures with his fishing buddies to remote parts of Alaska, his annual ski vacations out west with his kids and his incredible international travels - too numerous to count. Most recently, Steve and his partner, Nancy, enjoyed traveling, movies, the arts and much laughter during their past four years together. Steve stayed connected to friends across the globe for decades, sharing a mutual passion for neuroscience and mental health. Steve’s quest for knowledge never stopped; he kept abreast of the latest research advancements across a range of disciplines, actively engaging in the scientific field for six decades. On April 23, 2021, surrounded by his children and Nancy, in Hollywood, Florida, Stephen Hugh Koslow passed away. Steve was born in New York City on October 14, 1940. He grew up in the Bronx, with his sister Virginia (Ginny) and parents Julius and Lilian Koslow. Family was an important aspect of his life; Steve and Ginny grew up spending many weekends with close-by cousins, aunts and uncles. He was loved by so many of his cousins throughout his life, and Steve and Ginny maintained a life-long loving, supportive and close relationship. Steve attended Evander Childs High School and following graduation from Columbia University with a Pharmacy degree in 1962, Steve earned a PhD in Pharmacology from the University of Chicago in 1967. Steve conducted his Postdoctoral work at the Karolinska Institute in Stockholm, Sweden and returned to the U.S. in 1970 to begin his distinguished, 35 year career as a federal civil servant and Senior Executive with the National Institutes of Health in Maryland. Steve is recognized globally as an innovator and leader in advancing the research field of neuroscience and developed programs for data sharing among scientists worldwide. Most notably, Steve led the establishment of the Neuroscience program at the National Institute of Mental Health, NIH, in the 1970s, and created the Human Brain Project in the 1990s (HBP), including developing data sharing platforms for neuroscience known as Neuroinformatics. The HBP was recognized by President Obama as the framework for international collaboration and data sharing to facilitate a greater understanding of the brain (BRAIN Initiative). After retiring from the federal government, Steve continued to work in the field of neuroscience, serving in a number of positions over the past two decades with private and non-profit organizations. Up until very recently, Steve continued to consult at the University of Miami, Miller School of Medicine as a Grant Coach and career mentor in the Departments of Anesthesiology, Neurology and Psychiatry, and also at Louisiana State University. Steve loved his work, but his first love was his family - especially his children and grandchildren. Steve was an amazing father and champion for his children throughout their life. He loved his grandchildren with all his heart and regularly did special things for and with each of them to show them just how wonderful and unique they were to him. Steve loved to take the grandkids snorkeling on the beaches of Florida, to Broadway plays and museums in New York City, and to explore the great culture surrounding them in the Washington DC area, where they all grew up. He was the proudest guy in the stands at their baseball games, cheerleading competitions, live performances and robotics competitions. He was, by far, the coolest Pa. Steve was also a super cool brother and uncle. He was his sister Ginny’s confidant, and always made special time for her daughters, Felicia and Heather Wasserman, offering his nieces support, advice and love throughout their lives and his. Steve and his former wife, Diane, raised their family in Maryland and his close extended family of first cousins, their children and grandchildren shared significant life celebrations, holidays and milestones together for decades. The Grunleys, Guggenheim/Levy/Shalowitz families and the Amsterdams have always held a special place in Steve’s heart. Steve is survived by his grown children, Karin Koslow (Tom Gleason) and Jamie Koslow; his grandchildren Rye and Siena Gleason, and Jackson and Maxie Koslow; his sister, Virginia Wasserman; his partner, Nancy Levin; and his former spouse for 46 years, Diane Koslow. Steve lived a busy and joyful life in Florida, with Nancy and her wonderful loving family, in remission from stage 4 lung cancer. The family will hold a private service on Thursday, April 29th and is sitting shiva via Zoom with friends and family Thursday, Saturday and Monday evenings. If you are a friend of Steve's and would like to join for shiva, email [email protected] In lieu of flowers, please send memorial donations to the Ginny and Kenneth Grunley Fund for Lung Cancer Research at the Yale Cancer Center, PO Box 7611, New Haven, CT 06519-0611. In the memo portion of the check, write: “In Honor of S. Koslow: Grunley Fund.” Your donation will help further research to treat the specific genetic type of cancer that afflicted both Steve Koslow and Ginny Grunley.

Stephen Hugh Koslow (Age 80) A sharp dresser, with a sparkle in his eye and a poker face, Steve loved to make others laugh with his witty, often sarcastic humor. He would find the absolute perfect GIFs to send his grandkids on a regular basis,... View Obituary & Service Information

The family of Stephen Hugh Koslow created this Life Tributes page to make it easy to share your memories.

A sharp dresser, with a sparkle...

Send flowers to the Koslow family.