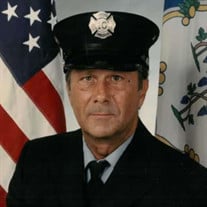 Robert J. Youngs, Sr. — father, husband, son, brother, grandfather, uncle, friend, Navy Frogman, and Firefighter passed in Hospice Care in West Palm Beach, FL on March 1, 2021 at the age of 77. Bob began his life in the Grand Rapids area of Michigan. He was very competitive and a great athlete, excelling at hockey and football. At age 17, Bob entered the Navy. This adventure took an exciting turn when he joined UDT Team 22 as a Navy Frogman. After his service, Bob moved to Hartford, CT where he began his career as a Hartford Firefighter. Hartford is where he met his soulmate (Donna Vozzolo). Bob and Donna wed in 1966 and had 2 children (Robert Jr. and Cindi) that they raised in Wethersfield, CT. After retirement in 1999 from the Hartford Fire Department, they moved down to Lantana, Florida. Bob enjoyed the warm air and sun, Jeopardy, crossword puzzles, solitaire, being cheap, eating cashews and drinking Busch Light. Bob is survived by his daughter and her husband, Cindi and Tom McGrath; his grandson, Christopher Youngs; his granddaughters, Lilla and Samantha McGrath; his daughter-in-law, Sarah Moss; his brother, Fred Youngs, his sister, Jean Youngs; many nieces and nephews; and countless friends he has made along his journey. He was predeceased by his wife of 47 years, Donna Vozzolo Youngs; his son, Robert J. Youngs Jr.; his parents; brother, Randy; and granddaughter, Elisabeth McGrath. Due to Covid, there will be no services at this time. In lieu of flowers, the family requests that donations be sent to The Navy Seal Museum at https://www.navysealmuseum.org/support.

The family of Robert Jay Youngs created this Life Tributes page to make it easy to share your memories.

Send flowers to the Youngs family.