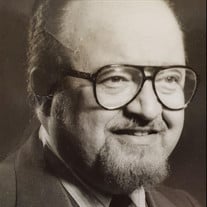 Rabbi Morton Malavsky passed away on July 28, at the age of 91. He had been a resident of Florida for the past 65 years and was the family patriarch of his large adoring family. He was a brilliant leader, an inspirational Rabbi, devoted husband and father, and a loving grandfather and great grandfather. He is survived by his wife of over 72 years, his Eshet Chayil, Celia, his three devoted daughters: Gladys (Yehuda) Azulay, Skokie IL; Irene Handler, Zikron Yaakov, Israel; Judy (Bob) Scott, Hollywood FL; his loving grandchildren and even more great-grandchildren, who all treasured their Zaydie. Rabbi Malavsky - whose father was the Chief Rabbi of Mexico City - was born into a long line of Rabbis and Cantors. He was a student at both Tomchei Temimim of Lubavitch and Yeshiva Torah Vodaath where he received his rabbinic ordination. A born mentor and man of vision, Rabbi Malavsky was full of tenacity, vigor, and courage. He was a strong supporter of Israel, leading yearly tours and raising hundreds of thousands of dollars on its behalf. Social justice was also important to him as he stood by President George W. Bush at the signing of a bill for improved health care for senior citizens. Rabbi Malavsky was an activist – he served as a life member of the Zionist Organization of America, had been a member of the South Broward Federation, and served as chaplain for the Hollywood Police Department and the Broward Sheriff’s Department. He believed that Jewish education was a key component to the survival of the Jewish people and thus, founded Beth Shalom Academy. He created a strong Jewish Community in Hollywood and served as president of the Rabbinical Association of Florida. His great legacy is proven by the many people he inspired and touched in so many ways as a pulpit Rabbi, as a speaker on his own radio show, and by the countless articles he authored. He had not only great wisdom, but also a wicked sense of humor, always making those around him smile. He had the gift of oratory and the ability to listen, and his students were imbued with Jewish values and a love he showed to his congregants, students, and family members. His passing leaves emptiness in his family and the community and all those he inspired on a daily basis. The Shiva will take place at the Malavsky residence: 4816 Taft St. Hollywood, FL. Shiva Hours: 10:00am-12:00pm; 2:00pm-5:00 pm; 7:30pm- 9:00pm. Minyan Times: Shacharit 8:00am; Mincha/ Maariv: 7:30pm.

Rabbi Morton Malavsky passed away on July 28, at the age of 91. He had been a resident of Florida for the past 65 years and was the family patriarch of his large adoring family. He was a brilliant leader, an inspirational Rabbi, devoted husband... View Obituary & Service Information

The family of Morton Malavsky created this Life Tributes page to make it easy to share your memories.

Send flowers to the Malavsky family.