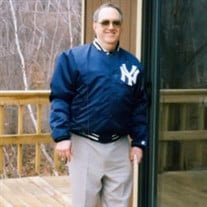 Milton Goldberg, 91 years old passed away at Trustbridge Hospice in Delray Beach on September 28, 2021. He was born in Newark, New Jersey on August 27, 1930 to Rose and Morris Goldberg. He lived many years in Cranford New Jersey and then proceeded to live in Edison and Monroe Township New Jersey before moving to Delray Beach Florida in 2011. He was a veteran and served in the Korean War and served in the Army from 1952 through 1960. Milt was a graduate of Rochester Institute of Technology and went on to become a linotype operator and also worked as a hardware salesman throughout his entire life. He was always willing and able to help anyone that was in need and always enjoyed the retail business and always a hard worker. In his spare time he enjoyed sports, working on projects and was always there spending time and assisting with his family and his two grandchildren. Milt was also very active in Jewish life. He was the Gabbai of the congregation for many years on the board of directors and co-director of the Senior Olympics of Monroe Township, NJ. He was honored by the Jewish federation for his dedication and commitment. He was also honored as the man of the year in 2007 as a friend, a Gabbai, a tireless worker for the men's club and the congregation, and received an award as one who is charitable and just fills the world with kindness in 2009. He is survived by his wife of 64 years Elaine Goldberg, Delray Beach, Fl, his son Marc, his daughter-in-law Harlene of Port St. Lucie, Fl, Brother David of Los Angeles, CA and his two grandsons who he cherished dearly Justin, Boca Raton, Fl and Mathew, Los Angeles, CA. Services will be held on Wednesday, October 6, 2021 at 3:00 pm at Sinai Memorial Chapels, 15120 Jog Road, Delray Beach, Florida 33446 In lieu of flowers, donations can be made to the Treasure Coast Food Bank or mailed to: 401 Angle Road, Fort Pierce, FL 34947 https://treasurecoastfoodbank.salsalabs.org/givetribute/index.html

Milton Goldberg, 91 years old passed away at Trustbridge Hospice in Delray Beach on September 28, 2021. He was born in Newark, New Jersey on August 27, 1930 to Rose and Morris Goldberg. He lived many years in Cranford New Jersey and then proceeded... View Obituary & Service Information

The family of Milton Goldberg created this Life Tributes page to make it easy to share your memories.

Send flowers to the Goldberg family.