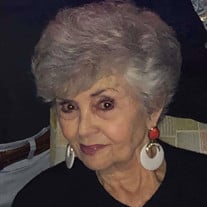 Loretta, of Boynton Beach Florida , formerly of Cinnaminson New Jersey, left this world on December 25th, she was 87 years old. She is the beloved wife of Martin Mazie, beloved mother of her four daughters, Shellie Dickstein (Philip), Dani Segal (Dan), Jody Ludwig (Marc), Kim Novick (Steve), beloved grandmother to Tal, (Jaimie), Yadin (Sophie), Shira (Elan), Noah (Tziporah), Ilana (Mike), Ashlee, Molly, Seth, beloved great grandmother to Jordana, Sierra, Salome, Leor, Gedaliyah, Ezzy, Yishai, Yehuda, Odin, Mazie, and friend to many. Loretta worked much of her life as a social worker, having obtained her BS in Psychology from Rutgers University and her MSW from Hahnemann University. Of the many jobs she had, her longest was director of The Mental Health Clinic of Bethesda Memorial Hospital in Boynton Beach Florida. She even held a therapy workshop at her independent living facility into her mid eighties, called Hope to Cope. She was extremely passionate about her career! She was also very active in developing programs in her independent living, creating Friday night services, running the chorus and the main theater shows. Loretta was known for her unique style, class, poise, demeanor and wit which made her stand out! She was definitely one of a kind! Loretta will be greatly missed and in our hearts forever! May her memory be a blessing! Donations can be made to The Alzheimer’s Association, The National Kidney Foundation, NAMI ( National Alliance on Mental Health), Vitas Healthcare (Hospice)

The family of Loretta L. Mazie created this Life Tributes page to make it easy to share your memories.

Send flowers to the Mazie family.