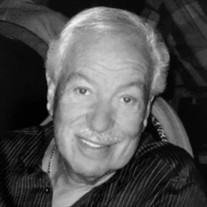 Jerry Paull, 84, of Wellington, FL passed away on July 18, 2020, after a long battle with Acute Myeloid Leukemia. He is survived by his wife, Karen Paull, his sons Kevin Paull, Rory Paull (Robert), his daughter, Shari Paull Nathanson (Scott), his step-daughters Tracey and Laurie Litt, as well as three grandchildren, Joshua, Alexandra and Zola. Jerry was born in Brooklyn, NY on November 26, 1935 and raised, along with his sister, Selma, by his parents, Morris and Gussie Polishuk, in the Sheepshead Bay Area of Brooklyn, NY. He lived in Merrick, NY and Florham Park, NJ before moving to Florida in 2006. As a young adult he was the first president of Temple Israel of South Merrick. Jerry was a self made man, who worked from the age of 14 and built several very successful businesses in the Interior Design field.  He fell in love with sports at an early age, and loved playing baseball. If not for an early knee injury, he would have played in the minor leagues for the Cincinnati Reds. He was an avid boatsman, and loved being out on the water. When he moved to Buena Vida, in Wellington, he served as Vice President of the Board of Directors. In early retirement, Jerry found a way to combine his love of music and his charitable interests. He, his son and his partner launched a new business venture as concert promoters. They promoted shows throughout South Florida with a portion of proceeds to benefit The Pap Corps - Champions For Cancer Research. He was beloved by all who knew him, and will be greatly missed. There will be a small service for family only on Tuesday, July 21, 2020 at 11:00AM that will be live streamed at: https://www.facebook.com/sinai.chapel.  In lieu of flowers, please send donations in Jerry’s name to The Pap Corps 1191 E. Newport Center Drive, suite 107, Deerfield Beach, Florida 33442 or www.thepapcorps.org.

The family of Jerry Paull created this Life Tributes page to make it easy to share your memories.

Send flowers to the Paull family.