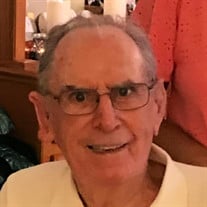 Delray Beach – James Frederick Thom, 87, of Delray Beach, FL, passed away on November 26,2020. Born on September 28, 1933, in Newburgh, NY, James graduated high school at Newburgh Free Academy in 1951. James began what would be a long career in printing while still in high school, also using these skills during his time in the U.S. Army in Korea. Upon his return from military service, he met and married Carol Ann Brach from Wallkill, NY and began a 40-year career imprinting and lithography with Western Publishing. Jim and Carol built their first home in Wallkill, New York and spent 19 years there raising their three children. In 1983 Jim and Carol relocated to Cambridge, Maryland when he was transferred with Western. They spent 20 happy years in Maryland before moving full time to Delray Beach, Florida in 2003, where they enjoyed the remaining years of his life. Jim was a hard worker and an avid reader, especially enjoying historical topics. He also enjoyed puzzles, crosswords and the daily Jumble. Jim enjoyed traveling and had spent time in all but 6 of the U.S. states, and enjoyed cruises to Alaska, Hawaii, Bermuda, the Caribbean, Canada, and through the entire Panama Canal. Jim was devoted to his wife and family and leaves behind many friends from New York, Maryland, and here in Florida. He will be long remembered for his kindness, his wit, and his great smile and laugh. Jim was predeceased by his parents, Dorothy and James Thom, and his sister Joan Shurter. He is survived by his loving wife of 61 years, Carol; son and daughter-in-law Scott and Linda Thom; daughter and son-in-law, Lori and Scott Davis; daughter and son-in-law, Dyan and William Bennett; and his brother and his wife, David and Brenda Thom. He also leaves behind 5 grandchildren: Andrew and Zachary Thom, Adam Davis, Tammy Columbo, and Jeremy Krupp; as well as one great-grandchild, Aidan Columbo. A graveside service will be held at the South Florida National Cemetery in Lake Worth on Tuesday, December 8th at 2:30 (attendees should arrive at 2:15 to be led to the grave site). A veteran’s service will be held. In lieu of flowers, donations may be made in James’ memory to the charity of your choice.

The family of James F Thom created this Life Tributes page to make it easy to share your memories.

Send flowers to the Thom family.