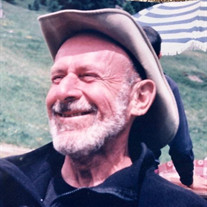 David Kaufman of Boca Raton, FL – age 86, passed away peacefully on August 1, 2019. David was born in New York City and raised in the Bronx and Far Rockaway. At age 16, he began college at the University of Michigan. There, along with a B.A. and Law Degree, he earned mischievous reputation among his brothers at the Sigma Alpha Mu fraternity and a lifelong passion for the Maize-and-Blue. Following college, David enjoyed a fruitful career in the law, spending the bulk of his professional life as in-house counsel for Ford Motor Company. In retirement, David developed a variety of interests, including photography, art collection, and cooking. His home remains an impressive testament to all three, as his shelves are lined with art pieces garnered through his worldwide travels, his walls form a life-sized collage of family photos, and his kitchen displays an artistic assembly of cookware glistening from the rafters. Beyond these hobbies, David’s primary passion was hiking. In this endeavor, he took on trails throughout the world, from Acadia to Yosemite, from Machu Picchu to Patagonia, and from the French Alps to Kilimanjaro. His love for the outdoors was eclipsed by only one thing: his love for his children and grandchildren. David spent virtually every waking moment thinking about his extended family and dedicating himself to their welfare. In addition to his parents, Aaron and Bess Kaufman, David is preceded in death by his sister, Carol Jaslow. He is survived by his three sons, Michael (Debbie) Kaufman, James (Becky) Kaufman, Thomas (Susan) Kaufman; his daughter-in-law, Cheryl Kaufman; his nine grandchildren, Lizzy (Ben) Tapper, Caleb Kaufman, Rachel Kaufman, Joshua Kaufman, Benjamin Kaufman, Daniel Kaufman, Aimee Kaufman, Abby Kaufman, and Olivia Kaufman; and his three great-grandchildren, Lily Tapper, Cadence Cunningham, and Samuel Tapper. Relatives and friends are invited to attend a memorial service in David’s honor on Sunday at 10:00 a.m. at Sinai Memorial Chapel, 15120 Jog Road, Delray Beach, FL. In lieu of flowers, donations in David’s name may be made to the Sierra Club. Online condolences may be made by visiting https://www.sinaimemorialchapelsinc.com/obituaries/David-Kaufman.

David Kaufman of Boca Raton, FL &#8211; age 86, passed away peacefully on August 1, 2019. David was born in New York City and raised in the Bronx and Far Rockaway. At age 16, he began college at the University of Michigan. There, along with... View Obituary & Service Information

The family of David Kaufman created this Life Tributes page to make it easy to share your memories.

Send flowers to the Kaufman family.