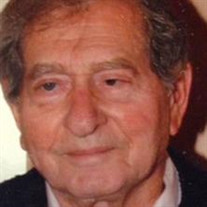 Beloved father, grandfather, great grandfather, uncle, and friend, passed away peacefully on April 17, 2017 at his home in Delray Beach, Florida. Al had just celebrated his 99th birthday on March 18th, surrounded by family and friends at his country club. Al was born in Canton, Ohio in 1918, and graduated in 1942 from the Ohio State University with a degree in Business Administration. He settled in the Toledo area in 1953, where he at different times owned and operated two insurance and investment firms: the former Dickson, Burns & Kranz and the former Alvin K. Dickson & Associates. One of his proudest accomplishments was serving his country in the U.S. Army. He enlisted in 1942, and he fought in Europe in 1944 and 1945 as an Army lieutenant with a quartermaster truck company attached to the 11th Armored Division of Lt. General George Patton’s 3rd Army. Primarily assigned to deliver ammunition and gasoline to tanks on the battlefront, Lieutenant Dickson was wounded twice in December, 1944, but returned to his unit immediately after receiving medical care each time. He said highlights of his combat experience included helping rescue a trapped infantry unit “under very heavy shellfire” in January, 1945, for which he was awarded the Bronze Star. The story is featured in his war diary, a copy of which is at the Veterans History Project archive at the Library of Congress. His story is also told in the Library of Congress Veterans History Project book, Voices of War. Al was one of eight U.S. veterans of The Battle of the Bulge who received France’s highest distinction, the Order of Légion d’Honneur medal from Philippe Letrilliart, consul general of France, during the battle’s 70th anniversary award ceremony held in 2015 by the Boynton Veterans Council at Veterans Memorial Park in Boynton Beach, Florida. Al was an honorable man, lifelong learner, and an eternal optimist. He took classes in computers, cell phones, and bridge to keep current well into his nineties. He had a great passion for life and a strong devotion to his friends, family and the Jewish faith. He was a longtime member of Temple Shomer Emunim in Toledo. He made everyone feel very special. He was an avid golfer, and enjoyed playing tennis, bridge and poker with his friends. He loved investing in the stock market, and was president of his investment group for decades. He also had a rich baritone singing voice and was a member of several vocal groups throughout his lifetime, and sang with a dance band in the 1930s. Al enjoyed traveling all over the world and loved to share photos of his adventures. He was a wonderful storyteller, and could retell every joke he ever heard. “Buckeye Al” loved Ohio State football and travelled to many of the championship games over the years. He is survived by his brother Jack Dickson (Harriet); daughters Suzanne Dickson Albert (Phil), Lynne Hirsch Gaines (Ron), Shelly Hirsch Schaefer (Dan); and son Terry Dickson (Anne); grandchildren Jonathan, Andy, Amy, Eric and Stephanie; great grandson Benjamin; nieces Nancy Jo Krieger, Robin Cherry, Debbie Recht, Harriett Reisman Snyder, Barbara Brenner, Suzan Bach, and Janet Fink; nephews Michael Dickson and Larry Langsbard; special family members Paul and Susan Stark, Shelley Pfaff, Susan Beth Stark, and their children; special companion Sally Lipton and family; and special friends Shirley Gerber and family, and Dick Thielmann. Al was preceded in death by his parents, brother Phil and sister Sandy, former wife Doris Dickson, beloved wife Bobbie Hirsch Dickson, and beloved companion Eleanor Stark. The family would like to thank Kevin Coyle, Elite Senior Home Care and their caregivers Marie and Milouse, the Veterans Administration and caregiver Regina, Teresa from Trustbridge Hospice, and Dr. Douglas Colman for their extraordinarily kind and loving care. The family asks that memorial contributions be made to HonorFlight.org or Jewish Family Services. Memorial services will be held in Delray Beach, Florida. Online condolences to the family can be made at sinaimemorialchapelsinc.com.

Beloved father, grandfather, great grandfather, uncle, and friend, passed away peacefully on April 17, 2017 at his home in Delray Beach, Florida. Al had just celebrated his 99th birthday on March 18th, surrounded by family and friends at his... View Obituary & Service Information

The family of Alvin K Dickson created this Life Tributes page to make it easy to share your memories.

Send flowers to the Dickson family.